The Royal Panda Casino is still quite young, having only opened its doors in 2014 but the progress it’s made is quite incredible. The brains behind the operations seems to be quite progressive and we can confidently say this based on the way this casino has sourced its games and continues to do so. When they initially started operating, they were offering games from three prominent software providers. When we last checked in on them, they were offering games from just over 10 software providers! This means that Royal Panda Casino is offering more games than ever! This is good news for all involved and it’s why we’re impressed with this place.

With its crest of royalty and its multitude of casino games, Royal Panda casino effortlessly blends fun, entertainment and class into one great casino package. As the mascot of the casino, the Royal Panda himself can be seen all over the show. If he’s not flashing those sharp pearly whites, he’s holding his sceptre and letting you in on the latest promotions. The casino is mainly adorned in red and this further ads to the royal ambience that the casinos would like to emit. Navigation is easy thanks to a user-friendly layout and once you see what’s on offer, which is practically everything, you’ll want to stay.

It’s very rare that a mobile casino operator gets it completely right and Royal Panda, despite it’s being impressive on the whole, does fall short of the glory in one department – that of the bonus. This is not to say that they won’t give their new Canadian players something to chew on. It’s just that their bonus is rather nominal. Royal Panda provides new players with a 100% match up to CA$100. There is however, two sides to the story – a smaller bonus usually means that meeting wagering requirements will take less time. Don’t get us wrong, a big bonus is great, but a small one means cashing out a lot quicker, so in this sense, the Royal Panda welcome bonus is not so bad. Plus, the casino does have ongoing offers and a loyalty point system – more than enough ways to get more bang for your buck.

We mentioned earlier that Royal Panda uses at least 10 software suppliers to provide its impressive assortment of gaming options, which includes all the usual refineries such as slots, blackjack, roulette and video poker. The casino also has a live dealer section where real card and table games are streamed allowing for a new level of immersion, interaction and game play. On the software side of things, the following providers are giving the Royal panda casino its gaming content:

Royal Panda Casino is geared towards giving you every possible way to play and win. This casino is kitted out with high quality games and covers everything you could want. You’ll be able to enjoy mobile video slots, video poker, a barrage of card and table games like roulette and blackjack, and in all sorts of variations. But it goes so much further than just slots and table games because the Royal Panda is outfitted with Evolution Gaming and this means it’s got live dealer casino games as well. You’ll be able to play games taking place in real time and being conducted by real people. Popular titles in this exciting range include Live Speed Baccarat, Live Caribbean Stud Poker and Live Three card Poker. Let’s not forget the mobile sportsbook that gives you access to sporting events all over the world! 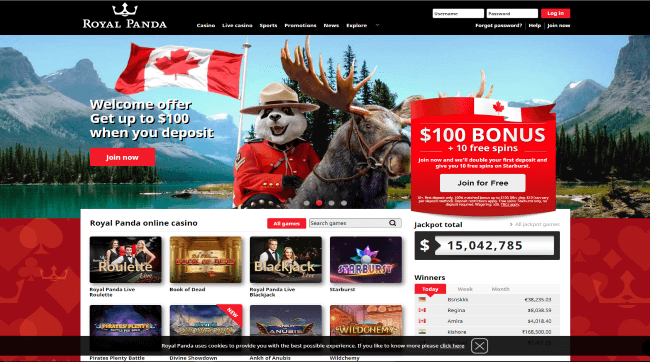 Royal Panda offers a wide range of casino banking solutions, each certified as safe thanks to the casino’s SSL protocols and its verification from companies like Visa. Overall, you can rely on credit cards, debit cards, e-wallets and direct banking solutions to make deposits and withdrawals from the casino. Royal Panda has intricately listed and laid out its various banking options and included key info such as the transaction time, a fee if any as well as the minimum and maximum deposits that one can make at a time.

The Royal Panda Casino carries an MGA approved gaming license and is thus a regulated casino. This makes the Royal Panda a safe casino at which Canadian mobile casino players can play. The casino also fully supports responsible gaming, which is part of the regulatory process and thus there are various solutions on offer to any player who thinks that the fun might be getting to be more of a burden. From limits on how much you can deposit to time outs and self-exclusions to putting you in touch with organisations that can assist, Royal Panda does all it can to ensure the protection of its players.