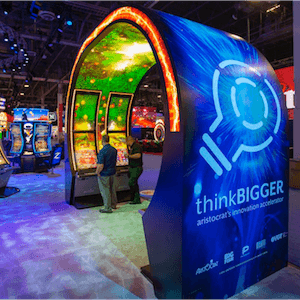 G2E Vegas is held annually, giving casino game designers and innovators the chance to showcase the latest technology. There were many impressive things to see this year, with the latest online casino games, exciting new hardware, and more showcased. But few will argue that developers Aristocrat stole the show, wowing guests with a stunning new innovation called the Arc Canopy.

The incredibly designed piece of hardware went beyond what anyone expected, linking multiple electronic gaming consoles via a vast, swooping ceiling arc. Guests were not only able to walk beneath the arc, but could also play casino games against one another on the multiple consoles, with high quality graphics interacting on the canopy, high above their heads.

There was no question that, as far as G2E Vegas was concerned, the Arc Canopy drew more curious guests than any other attraction.

Many assumed that the fantastic Arc Canopy was an idea that Aristocrat must have been brewing for some time, but according to the two casino design geniuses that concocted the idea, Mechanical Engineering Lead Frank Rodriguez and Senior Electrical Engineer Stephen Shaffer, it was more of a spontaneous scheme.

Rodriguez explained that he and Shaffer were contemplating new casino themed attractions that would draw guests for G2E Vegas, when Shaffer suddenly announced he had an interesting idea. The two drew up the concept in a computer aided design (CAD) program, wondering if such a thing would even be possible. Upon finishing the creation in CAD, the two realised that not only would the creation be viable, but also that that it was almost sure to be a massive hit.

With the outline looking promising, Rodriguez said that the two were encouraged, deciding to run with the project and see where it went.

Everyone agrees that the Arc Canopy is an impressive piece of casino game technology, but the question most commonly asked is what are the applications?

Shaffer elaborated, saying that although the hardware was indeed all about wowing passer-by’s with a never before seen display, it was also about utilising enormous screen space for multiplayer applications. The potential for players to engage in multiplayer experiences, with gameplay interacting in spectacular displays above their heads, is endless.

With the innovative creation drawing such attention, it almost certainly isn’t the last we’ve seen of the Arc Canopy. If it appears in brick and mortar casinos in the future is still unknown, but hopes are that the concept will catch on.