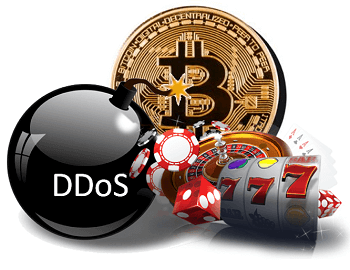 Online gambling sites have long been the biggest targets for distributed denial of service (DDoS) attacks. However, they are now being joined by Bitcoin websites and exchanges, which are increasingly finding themselves under fire in the digital world.

Online security software and services expert Imperva recently released its Global DDos Threat Landscape report for Q3 2017, revealing the biggest targets for the period along with the methods used by digital attackers who overflow websites with data in order to obtain ransom payments or severely impact their competitors.

Based on previous reports, Imperva found that over a third of network layer attacks were targeting online gambling sites and similar services during the period in review. iGaming topped the list above all other industries by attracting 34.5% of all attacks, while other gaming sites scored 14.4% and internet services (including those business outsourcing firms working for gambling operators) came in third at 10.8%.

The attacks on iGaming operators have also contributed to an abnormal score for both the Philippines and Taiwan on the Top Attacked Countries list, according to Imperva. Apparently, these results are also the products of certain large-scale campaigns that have targeted Asian gambling operators on the web.

However, it is yet to be seen how long the gambling industry will top the DDos list. A dramatic increase in the price of Bitcoin this year has lead to what Imperva has termed attacks targeting a high number of cryptocurrency services and exchanges, with Bitcoin being a particularly frequent target.

Imperva has noted that almost 74% of all Bitcoin sites that use its services have suffered some kind of DDoS attack in the third quarter. While the total number of targeted sites is still marginal compared to numbers of sites in larger categories like iGaming, Bitcoin websites have nonetheless come in eights on the targeted industry list, attracting 3.6% of all known attacks.

Botnets And Malware Ramp Up Figures

Imperva altered many of its criteria for reporting in Q3, creating problems with year-on-year sequential comparisons. However, the firm has noted that DDoS attacks have continued to grow in both intensity and duration for many of the industries that have graced their target lists.

DDoS attackers are also targeting the same websites more frequently, with almost a third of network later targets hit more than 10 times throughout Q3. Meanwhile, 16% of application layer targets suffered six or more attacks during the same time period, ramped up even further by the recent emergence of powerful botnets and malware hidden in Android mobile apps.