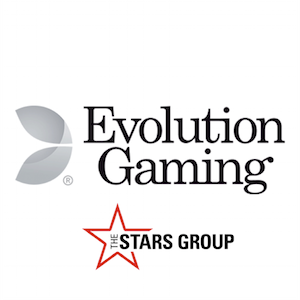 Leaders in Live Casino entertainment, Evolution Gaming, have joined forces with The Stars Group in New Jersey. Evolution will power the Live Casino section at the group’s PokerStarsCasinoNJ.com online portal. The gaming group has said that the move is as a result of the increasing demand for Live Casino services, which has already exceeded all industry expectations.

The Stars Group operates numerous online gaming brands in the recently re-regulated state, including BetStars and PokerStars, and relies heavily on the support of companies driving the technical know-how behind the Live Casino operations. To this end, the group has entered into similar partnerships with a number of other tech companies, including technology masters Quickspin and Play’n GO.

Evolution Gaming’s Director of Business Development and Land-Based Sales, James Stern, said that this was not the first time that the company had inked a deal with the world-renowned Poker group. Stern said that the two entities had been tackling mutual projects since 2015. He also said that given the high market demand, it was necessary to pool resources in order to meet industry needs.

Judging by the popularity of the Atlantic City studio, one can only expect that PokerStars’ New Jersey players will experience the same satisfaction when accessing the online Live Casino studio.

Chief Executive Officer of Evolution Gaming, Martin Carlesund, issued a stern warning that immediate returns were not to be expected from the New Jersey studio. He said that the US was very much a long-term endeavour and that the company would be treating the project from this point of view.

Carlesund also referred to the fact that expansion into more states was high on the company’s priority list, but cautioned that it was near impossible to predict exactly when more states would be joining the gaming revolution. Legislation is fairly new still and it would not be an over-night process for everyone to get on board. Much is to be done in the way of overall logistics as well as implementation and practical application.

A definite is the fact that Evolution Gaming appears to be 100% on board.