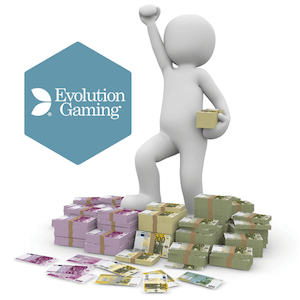 Premium live dealer gaming specialist Evolution Gaming has reported some exceptional financial results for its 2017 fiscal year. The group has revealed year-on-year growth across many of its key financial verticals for the twelve months ended on December 31, 2017.

Evolution’s operating revenues soared to $222.7 million (€178.4 million) during the period in review, representing a massive 54% increase over the €115.5m posted at the end of 2016. The firm’s earnings before interest, tax, depreciation and amortisation (EBITDA) also grew a whopping 81% year-on-year, reaching €80.6 million at the end of the year.

Profits And Dividends On The Rise

Another of Evolution Gaming’s primary verticals to increase last year was its overall profits. The group has reported a profit increase from €31.7 million to €62.1 million over the twelve months in review, as well as earnings per share that amounted to €1.73 in 2017 – compared to just €0.88 the year before.

Evolution’s board also proposed a dividend of €0.90 for the year, which came as a 100% increase over the €0.45 posted in 2016. The firm’s full-year growth rates have also come after it experienced a highly successful Q4 last year, during which its revenues grew by 48% to reach €50.7 million in total.

The live casino gaming specialist’s EBITDA for the last three months of the year was another figure to soar for the firm, growing by 74% year-on-year to reach €22.6 million. Profits during this period also grew an exceptional 100%, reaching €18 million over €9 million posted back in 2016.

President and CEO of Evolution Gaming, Martin Carlesund, has commented on his firm’s results. He noted that looking back at 2017, it is easy for him to say that the year was ‘exceptional in many ways’. However, he added that this is not a reason for Evolution to take anything for granted, saying that the firm should rather continue to work hard each day to maintain its strong market position.

Carlesund also added that, as a whole, he can see many good prospects to continue to bolster his firm’s operations in 2018. The CEO added that new studios and multiple exciting product launches are in the pipeline for his company this year, also noting that it has a clear focus on ‘profitable growth’ for the 10 remaining months ahead.