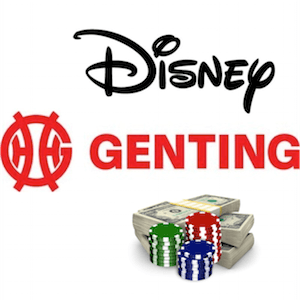 The Genting Group has filed a lawsuit against 21st Century Fox and Disney. The company entered into an agreement with 21st Century Fox for rights to some of its intellectual property, however Fox has triggered a contract clause to cancel the deal.

The Genting Group is now seeking expenses and damages of over $1 billion.

21st Century Fox entered a deal with Genting that allows the casino company to use the entertainment company’s brands. The company planned to use intellectual property from movies such as Planet of the Apes and Ice Age in its new theme park Fox World.

The new park is situated in the center of Genting's Resort World in the Genting Highlands outside Kuala Lumpur. The park was scheduled to open in 2016, but due to several delays, the opening will only take place in 2019.

In the interim, Fox has been purchased by Disney for $71.3 billion. It is widely known that Disney is anti-gambling and believed that Fox is trying to pull out of the deal because of its new ownership. It has raised concerns about the theme parks proximity to the casino, not wanting its brand to be associated with the activity.

To pull out of the deal Fox issued a notice of default, which required the company to open the park within 30 days, or lose the Fox agreement. The notice is based on the opening being delayed by three years and therefor Genting has failed to meet its contractual obligations.

However, millions has already been spent in developing the park, and the brand is now suing the companies for pulling out of the deal.

The theme park is situated on 25 acres of land with 25 rides and attractions planned. It forms part of Genting Resorts World Malaysia, a fully integrated resort that offers hotels, restaurants, retail experiences, shows and events, casinos and the theme park. The resort already attracts more than 23 million tourists a year and has been advertising the world first 21st Century Fox World Theme Park.

The company is an entertainment giant, which aims to be the leading operator of integrated resorts worldwide. It owns several resorts in Malaysia where it has been operating for over 50 years.

Genting has called Fox’s attempt to break the agreement a case of sellers remorse on both it and Disney’s part.