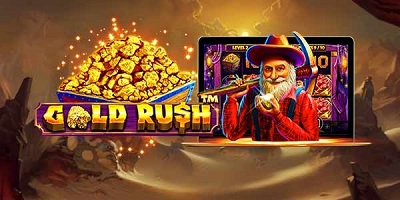 Gold Rush is the title of Pragmatic Play’s newest online and mobile optimised slot, and a rush of gold is exactly what Canadian players at the developer’s casinos can expect! The new slot is based on the legendary gold rush that took place in America in the 18th century, and boasts authentic graphics, symbols and shining metal for a great gaming experience.

The brand new iOS and Android optimised game has now been released at Pragmatic Play casinos, and sees its action going down in an old gold mine. In this mine, a cheerful prospector and his donkey dig up piles of shining treasures, along with generous helpings of free spins and an explosive dynamite wild symbol.

The reels of Gold Rush contain old-time symbols of lamps, gold-filled carts, pickaxes, and the two main characters mentioned above, who also happen to be the slot’s highest paying symbols. The fun also plays out across 5 reels and up to 25 paylines, over which stone-textured playing card icons will also appear.

In addition to its regular icons, the Gold Rush online slot also boasts a few special symbols on its reels that serve to activate its bonus games. The red dynamite bundle is Wild, while a view of a mine tunnel is the scatter that triggers an exciting free spins round.

Once the free spins begin, players will be able to collect gold nuggets in the mine. Once enough have been collected, a new set of reels with extra higher-paying symbols will take its place on the screen, and the free spins themselves will begin.

This free spins game also has four separate levels, with each one adding more prospector symbols for even bigger wins. Better still, extra free spins can also be won by landing more scatter symbols during the bonus game.

Commenting on the release of the new slot, Head of Games Production at Pragmatic Play, Catalin Bratosin, has noted that Gold Rush was inspired by her company’s aim to bring players the thrill of their favourite land-based slots in a convenient online and mobile form. She stated that the new game boasts intuitive mechanics, plenty of bonus features, and the potential to win big with every spin.

Bratosin also noted that players have responded exceptionally well to Pragmatic Play’s philosophy to create engaging and high quality games, and that Gold Rush is no different. The new mobile slot is now available for real money play at Pragmatic Play online casinos, and is sure to be another smash hit from this up and coming developer.