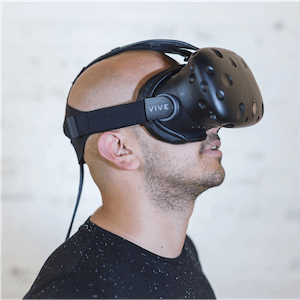 Leader in virtual reality technology HTC Vive and global gaming giant IGT have signed a deal through which IGT will offer HTC Vive Studios’ VR content through its Virtual Zone casino gaming platform. Virtual Zone is a competitive gaming arena that allows casino players to compete with each other for cash prizes in interactive VR tournaments, as well as enjoying virtual games through physical gaming machines.

The new deal is part of HTC Vive’s first steps into the online casino industry, as well as the completion of the first market-ready VR gaming product from IGT. Joel Breton, the VP of Global Content at HTC Vive, has noted that arcade-like gaming experiences have grown drastically in popularity around the world as VR has been shown to be a reliable traffic generator at entertainment and gaming venues.

According to Breton, by pairing IGT’s expertise in gaming with his firm’s world-class VR technology, the companies are launching a combined gaming platform that can offer the best experiences in VR tournaments and standalone arcades.

Enrico Drago of IGT’s SVP Global Product Marketing Interactive, Betting & Licensing department also commented, saying that IGT’s Virtual Zone is a thrilling revolution in modern casino gaming, and a crucial step in diversifying the developer’s porfolio with unique and in-demand offerings. The executive also added that HTC Vive’s expertise in VR and commitments to developing great VR experiences have made the firm an ideal partner for IGT’s first VR product.

Virtual Zone is now live at The Orleans Hotel and Casino in Las Vegas, utilising HTC Vive hardware to deliver world-class virtual gaming. The platform also offers multiplayer competitions, which allow land-based players to compete with each other in real time to earn coveted Slot Dollars.

To add to the tournament platform, IGT has also revealed a new Software Development Kit which game designers can use to create more VR content for the Virtual Zone. Vive Studios was the first game developer to use the SDK product, optimising the Arcade Saga game into one that is fully tournament-ready for brick and mortar casino floors.

In his statement, Drago also added that IGT is committed to delivering the best possible content for its players across all major platforms and channels. He noted that Arcade Saga is a testament to the power of IGT’s SDK product, especially seeing that HTC successfully used it to adapt one of its top VR games into one that casino customers can enjoy in a brand new way.