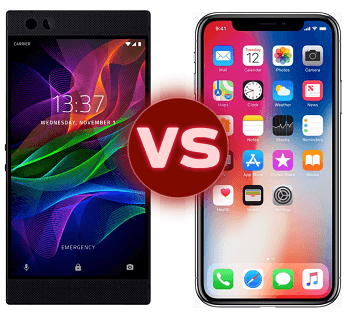 Two new smartphones that have Canada’s mobile casino enthusiasts abuzz with excitement are the Apple iPhone X and Razer’s market debut, the Razer Phone. The big question, of course, is which of those two devices is best for gaming. Both devices are loaded with fine features and specs, so the choice can be a tough one.

For your convenience, we have taken a look at the specs of both devices, and, because we love gaming too, we paid special attention to the things that gamers care about – screen size, display quality, graphics, resolution, battery life and audio.

One of the first things we noticed about the new iPhone X is that Apple is certain size matters. The new smartphone boasts a 5.8 inch Super AMOLED display, regarded as one of the best the world has seen.

Apple’s new device also has dual cameras with dual OIS, making it one of the best smartphone cameras of all. Both of these specs got us excited, because, let’s face it, visuals are pretty important when it comes to gaming. A good smartphone camera could also help improve the experience of playing augmented reality games, which we may see more of, given the phenomenal success of Pokémon GO.

As far as audio goes, the iPhone X features an earpiece for an immersive sonic experience.

Software speed can make or break a gaming session, especially if things slow down so much that connection is lost or that the game produces an error message instead of winning results. That is not likely to happen with the Apple iPhone X, as its A11 Bionic chip can hold its own when compared with a few Intel CPUs. It also comes with the most recent version of iOS (iOS 11), which means there is no need to wait for an operating system update. This means the phone’s software should always function fast and smoothly.

When Razer developed the Razer Phone, the company did so with gamers in mind. One of the first things that make this clear is its display (no pun intended).

The new smartphone features a 5.7 inch IGZO LCD display, making it only slightly smaller than the Apple iPhone X. It also has a refresh rate of 120 Hz and UltraMotion adaptive sync, which means images are created by the GPU at the speed at which they can be rendered. This makes for smooth visuals, even if frame rates slow down at various points in the game.

Rather than going the route of an earpiece, the Razer Phone boasts dual stereo, front-facing speakers with Dolby Atmos tech and amplifiers. However, the smartphone will only receive Android Oreo, the latest version of the Android OS, sometime next year, and it will initially run Android 7.1.1.

We think that, when it comes to playing mobile casino games, the choice between the new Apple iPhone X and the Razer Phone is not an easy one to make. Both have enough features to ensure immersive visuals and smooth gaming, while the latest version of iOS makes the iPhone X even more attractive.

On the other hand, it is obvious to us that the Razer Phone was developed with gamers in mind. It is apparent in everything from the display and front-facing speakers to the inclusion of UltraMotion and a super-charged refresh rate, seen previously only in the iPad Pro.

When deciding which smartphone to get, Canadian gamers may simply have to rely on good old brand loyalty. The battle between iOS and Android simply rages on, and is once again fuelled by phones that are equally as impressive, but run on different operating systems. Whatever the choice, both phones mean serious business for gamers.