No WSOP Wins for James Holzhauer 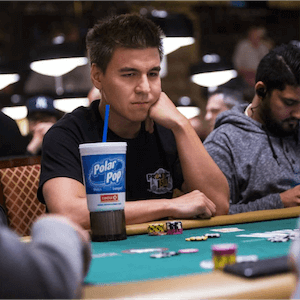 James Holzhauer, the Jeopardy! sports show contestant who makes a living betting on sports, is the 4th-highest earning game show contestant of all time. This is thanks to his 32-show run and prize money of almost US$3 million. But he didn’t manage to find the same success at the World Series of Poker! He got eliminated from 2 events at the Rio in Las Vegas recently.

The popular contestant played the Super Turbo Bounty No-Limit Hold’em event, with a buy-in of US$1 500, and though he enjoyed a strong start, the champ got eliminated around 6 hours into the game. In the 1 867-player field, Holzhauer finished in 454th place.

The game show champion went All In with pocket 7s but then got called by an opponent holding pocket 5s. A 5-card dealt on the Flop then knocked Holzhauer out of play. The 35-year old was similarly unsuccessful in the US$1 000 buy-in Tag Team No Limit Hold’em event that he played with Mike Sexton, Poker Hall of Famer.

Holzhauer previously took part in online Poker games semi-professionally while he was studying at the University of Illinois. When the Unlawful Internet Gambling Enforcement Act was passed in 2006, however, he stopped. He told the Las Vegas Review-Journal that he decided not to pursue this avenue of income thanks to a combination of the UIGEA legislation and realising that betting on sports brought in more money.

The UIGEA ruling rendered it illegal for payment processors to expedite financial transactions related to gambling sites for citizens of the USA. In April 2011, the Department of Justice saw fit to seize the domains of Absolute Poker, Full Tilt, and PokerStars, in what became known as Black Friday for the online version of this classic card game. It was alleged that all 3 of the platforms were in violation of UIGEA.

Instead of furthering his study of the card table, Holzhauer got his BS in Mathematics and moved to Las Vegas, where he started professional wagering on sports. This is also when his fascination with game shows began, and savvy viewers will have recognised him from 500 Questions and The Chase when he finally appeared on Jeopardy!!

Holzhauer’s incredible Jeopardy! run saw the daily show enjoying a viewership bump of 11%. He’s most certainly reached celebrity status, and his commitment to charity work has ensured a stellar reputation.