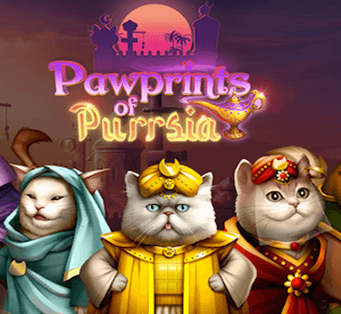 When a slot is called Pawprints Of Purrsia, it is clearly going to be one furry ton of fun. Kalamba Games are the masterminds behind this upcoming title, and clearly banking on the near universal love for cats. Yes, the game is chock full of furry, fluffy cats, all of which are ready to steal the players heart. But don’t think these felines are the ordinary kind, as they also happen to be the cast the 1001 Arabian Nights classic story; Aladdin.

But, of course, a slot can’t live on cute pussy cats alone, and Pawprints Of Purrsia is about far more than just being adorable. The game is also loaded with a wide variety of specials, bonuses, and innovative gameplay, making the title as fun to play as it is to look at.

The game is officially out on the 22nd October 2020, but here is a sneak peek at some of the interesting mechanics and special features.

Developers Kalamba Games are known for a few of their key mechanics, including Multiplier Wilds, Sticky Wilds, SpinBoost, and HyperBonus. These engaging features are, of course, all included in Pawprints Of Purrsia. But there is so much more to discover, with the slot offering enough interesting gameplay to keep even the fussiest of kitty cats entertained.

During the base game a Magic Lamp Multiplier Wild is the ticket to some enormous payouts. The lamp clearly has a genie inside, and that genie has the power to not only substitute for other symbols, but also to grant 1x, 2x and 3x multipliers.

Don’t look now, but the Bonus Wheel also seems to be magic. It will grant a Free Spin each time it is triggered, again and again, up to a maximum of 12.

Pawprints Of Purrsia players lucky enough to match 3 Golden Cat Bonuses are in for a ride. The Bonus Wheel Of Dreams is triggered, which may grant an instant, massive payout, or my also award one of the many other Spins Bonuses. It’s just a matter of luck, and perhaps even getting a little help from one of the furry slot game characters.

Last but not least, we have Free Spins, which come in a variety of different styles. Each version has its own version of Sticky Magic Lamp Multiplier Wilds, which is a sure ticket to some payout bonanzas.

Cat lovers and slot fans alike will be waiting in anticipation, eager to take their own trip into the fluffy, magical world of Pawprints Of Purrsia on desktop or mobile