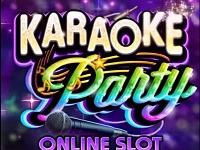 Hot on the heels of July’s launch of Reel Spinner and Electric Diva comes the news that Microgaming will release their music themed slots game Karaoke Party in August, 2016. The release of this game is already highly anticipated, as its slick 5 second teaser video gave players a glimpse into what they can expect.

Karaoke Party looks set to be another brightly coloured, vibrant online slots game and it’s rumoured that the soundtrack will be especially good. Microgaming is renowned for creating graphic rich games and Karaoke Party is sure to meet player’s expectations in every way.

Despite the immense popularity of their 243 Ways to Win games, Microgaming have opted for a more classic 5 reel, 9 payline design in Karaoke Party. This contrasts in an interesting way with the games modern theme, but it’s sure to be a welcome addition to the already enormous selection of 9 payline games the software developer has to offer.

The game is packed to the brim with bright lights, brilliant animations and vivid reel symbols and it can only be described as energetic. There are plenty of ways to win in Karaoke Party and it will be available in free play and real money mode, with a top jackpot payout of up to 150,000 coins.

Karaoke Party’s rocking theme is carried across in every possible way, and on the reels alongside the lower value symbols of 9, 10, J, Q, K and A are a group of singers ready to grab the microphone. The karaoke contestants include an all-girl group, a boy band, a male and female singer, and a couple singing a duet.

The game comes complete with a Wild and Scatter symbol, a free spins bonus and, as often found in Microgaming’s 9 reel slots, a Gamble Feature.

Karaoke Party will deliver plenty of opportunities for players to win big with every spin. The games logo is the Wild symbol that will perform the usual function of standing in for all other symbols except for the Scatter to complete a winning payline. All wins completed using the Wild will also be doubled.

The Rolling Dice symbol is the Scatter and will be the key to triggering 15 free Spins. When 3 or more of the Scatters appear on the reels simultaneously, players are rewarded with free spins, in which their winnings will be multiplied by up to 3x. The Free Spins can also be retriggered from inside the bonus round.

After every successful spin, players will have the option to trigger the Gamble Feature. This feature takes the form of a classic card game in which players must correctly predict the colour of a playing card to double their wins, or the colour and suit to quadruple them. This feature has an element of risk however, as an incorrect guess will result in all winnings being forfeited.

Karaoke Star looks set to be another great online slots release from Microgaming and is sure to be a hit with players.