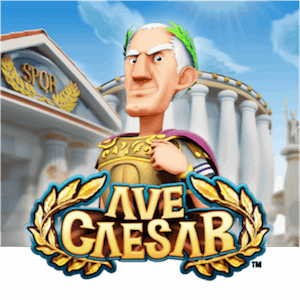 Leander Games is well known for some of the most creative slots releases on the web, and now the developer has yet another exciting game in store for its mobile players around the world. Ave Caesar gives punters to experience Ancient Rome as an action-packed slot, which is also chock-full of tongue in cheek humour and thrilling special features.

Historical-themed mobile slots often have a more sombre tone to them, but Ave Caesar has smashed this stereotype with a generous splash of humour. The new game has just been released to Leander’s online and mobile casino partners, and boasts a massive range of bonus features to provide great winning potential to players.

The game begins with amusing 3D cartoon characters and quirky visuals, upon which 5 reels and 20 paylines spin. Players will be able to walk down the streets of Ancient Rome, meet Roman soldiers and centuries, and match symbols across the reels for access to major cash wins and bonus rounds.

The base game of Ave Caesar is full of triggering symbols for special features too, with four bonus rounds in total on offer. These features can also be triggered at random, beginning with the Hannibal’s Heroes feature. Here, the legendary Roman general calls a herd of elephants onto the reel set to cover it in extra wilds for huge instant prizes.

The fearsome Gaul’s can also appear on the reels, throwing stones that turn into matching symbols with random multipliers added to the mix as well. The Centurion Maximus feature reveals big stacked 2x2 or 3x3 symbols on the reels, while the Caesar feature can start randomly to transfer up to five matching symbols, instant cash wins, or one of the other special features to the screen.

The 4 special features can be triggered by landing bonus icons on reels 1, 3 and 5. Once this happens, 1 of 4 features will begin at random, including the aptly-named Caesar’s Conquests feature, Glory of Rome free spins, Druid free spins, and the Roman Empire feature. Each of these games offers a slew of free spins, multipliers, moving wilds and sticky wilds, which will undoubtedly ensure that players never get bored while spinning the reels of Ave Caesar.

Last but not least, the Ave Caesar mobile slot also offers a sumptuous progressive jackpot. The odds of winning this prize increase as its value grows, and players who wager bigger stakes also have a greater chance of leaving with their bankrolls full. Leander has even added a gamble feature to their newest slot, which players can now enjoy at all licensed Leander online and mobile casinos.