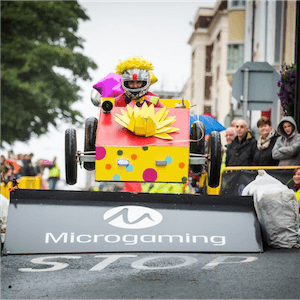 For many of us, some of our fondest memories involve the super exciting soapbox races of our childhoods. Which is probably why Microgaming’s annual Soapbox Race is such an enormous hit! The developer has announced that entries are open for the 2018 instalment of the fun and exciting event, scheduled to take place on September 1st in Douglas in the Isle of Man.

The meandering race will kick off at Circular Road, whisk through Upper Church Street, and whoosh back into Barack Street, where the finish line awaits the victor. The course will again be filled with exhilarating jumps, and many interesting twists and turns will have to be navigated.

The event is hosted annually as a fundraiser, and this year’s proceeds will again be donated to the Hyperbaric Isle of Man, a charity organisation providing hyperbaric oxygen chambers to more than 1,500 patients in need in the region, each year. To date, the race has managed to raise an impressive £7,000 for the local charity.

A Prize For Every Division

The race is a great deal of fun and prizes are awarded for every conceivable stunt and achievement in the book, including fastest lap, highest speed clocked during the race, the biggest jump, and even – you guessed it – the most impressive crash!

Past events have borne witness to a creative collection of soapboxes, all vying for top position in the outstanding kart design and best-dressed divisions. Soapbox designed have in the past included everything from the Snaefell Mountain Railway to a double-decker bus!

All For A Great Cause

Microgaming is a world leading online casino software provider and has been involved with the event since 2014, and the developer’s PlayItForward initiative will once again be providing financial support and assistance in terms of the organisation of the actual race. PlayItForward volunteers will be on site on race-day in order to aid, assist and direct wherever necessary.

3FM will be returning as broadcast partner, and the proceedings will again be promoted on-air. Entries will, as per usual, be open to corporate soapbox teams as well as private entrants.

This year’s race promises to be bigger and better than ever before, and when considering that all proceeds are being donated towards an excellent cause, it all makes for a fantastic day out.