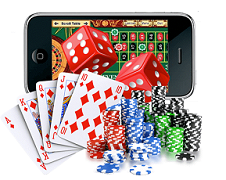 The mobile gaming industry kicked off with a bang in January this year, and in the twelve months since, there have been countless positive developments for this rapidly growing market. By April, research firm Newzoo released estimates for its Global Games Market report, revealing that the mobile gaming industry had claimed the lion’s share of the massive $108.9 billion market.

Newzoo labelled the mobile gaming segment the ‘most lucrative’ division of gaming, noting that the sector was quite clearly dominated by smartphone-based players. It was estimated that mobile gaming alone would reach an incredible $46 billion this year, with $35 billion of that coming from smartphone gaming alone.

Even at the start of Q2, it was clear that this was going to be an extremely successful year for mobile, and there are many factors that are still driving this success towards the end of the year. One of the largest drivers was the growth of China’s gaming market, with APAC regions generating a whopping 47% of global revenues this year and mobile revenues estimated to reach $14.6 billion or more by the end of 2017.

In fact, mobile gaming even seems to be stealing some of PC gaming’s thunder. Newzoo reported that desktop games and their industries have seen decreasing revenues since 2015 thanks to the transition millions of players have made to mobile gaming devices instead.

Numerous new innovations have also contributed heavily to mobile gaming’s sterling performance this year. Cryptocurrencies like Bitcoin shared their spot in the limelight during the second half of 2017 in particular, and mobile gaming operators were quick to spot their burgeoning popularity among casino players across the world.

This led to a surge of Bitcoin mobile casinos hitting the market, giving Bitcoin owners the chance to take advantage of the digital currency’s skyrocketing value by wagering it in real money casino games. This trend has only just begun, too; with Bitcoin’s most recent surge in value happening in just seconds thanks to CBOE offering futures on it, more mobile gaming brands are sure to join the bandwagon into the new year.

Lastly, a slew of new flagship mobile devices with innovative, gaming-friendly features also helped to make 2017 the best year yet for mobile. Samsung’s Galaxy S8 and Apple’s new iPhone X are both competing for their share of the mobile market through exceptional graphics, features and additions geared towards mobile players, offering unsurpassed gaming experiences for their owners.

Even VR and AR gaming has now been made attainable for mobile players, showing just how far mobile devices have come in the past year alone. With so many positive developments for the world of mobile, it is truly exciting to think what 2018 holds for the future of mobile fun and innovative gaming on the go!