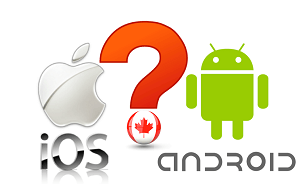 Statistically speaking, the age of mobile has never been more prominent. Canadians are right on trend with the rest of the world, using their smartphones and tablets for everything from streaming series to playing mobile casino games. In just the past few years alone, mobile gaming has blossomed into a massive industry that is fast overtaking traditional desktop gaming due to its convenience and high level of accessibility.

Mobile games may contribute to the massive growth rate of mobile media use, in fact by 2018, the mobile gaming industry is expected to be valued at around $44.2 billion, up from just $24.4 billion in 2014. With that said, the market share can further be divided up per country into which players prefer which operating systems, and in Canada, the current mobile industry leader is crystal clear.

A recent survey from Catalyst and GroupM has revealed some interesting insights into the adoption of the mobile trend in Canada. Digital data firm comScore has also put months of work into researching the unique dynamics behind how Canadians prefer to spend their mobile usage time, whether it be on gaming, multimedia, or any other popular modern pastime that their device offers on demand.

Android Ahead of the Pack

ComScore’s 2015 Canada Digital Future in Focus findings have revealed the firm’s final thoughts on the data it has tracked in terms of the latest desktop, mobile and video usage trends, noting a definite and substantial rise in mobile usage. Interestingly, these findings differed from the local Canadian regulator’s findings, but comScore is confident in their research, which reveals that the number of mobile users in Canada grew by 5% over the last year to reach around 24.3 million individuals.

So, how does the mobile market share lie in terms of the operating systems Canadians prefer? ComScore’s research revealed that over 81% of Canadians who subscribe to wireless data own a smartphone. Delving deeper into operating system share, it has become clear that Android is the winner for the majority of Canadian mobile owners, with 50.5% of mobile owners opting for an Android-powered smartphone or tablet in the present market.

The Apple iOS operating system is hot on Android’s heels, scoring 38.3% of the market share. Among these giants were other, smaller market players, including Blackberry with 8.9% of the share, as well as Google with 5.3% and HTC with 3.7%, both of which contributed towards Android’s final scores. Windows Phone OS’s market share fell below the 1% mark earlier in 2016, so at present it seems that Microsoft isn’t really a player in the Canadian mobile game. This may change however, if Windows mobile can release a device that Canadians feel is able to compete on even footing with iOS and Apple.

When looking even closer at smartphone and tablet brands as opposed to operating systems, Apple holds an advantage over Samsung by a slight margin of 5.9%. Tablet usage in Canada is also on a sharp rise, with over 9.3 million tablet users present in the current mobile sector. This comes as a notable 56% increase in tablet ownership among local players since mid-2013.

Regardless of which operating system Canadians choose, the rapid growth of the mobile market means a larger range of mobile app options for Android and iOS users alike. Mobile gaming has kicked mobile growth into overdrive and with an estimated 173 million social casino players worldwide, social mobile casino and skill games are also making headlines as some of the mobile industry’s latest trends.

It’s trend like these that keep pushing the mobile industry forward, and with Android currently leading the way in Canada it will be interesting to see whether Apple can close the gap, or whether the open source OS will stay ahead of iOS for the foreseeable future.