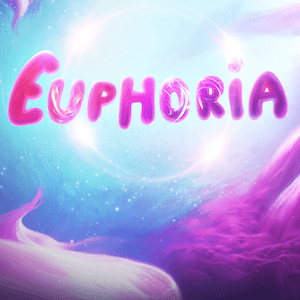 iSoftBet have finally debuted the third instalment in their Xtreme Pays Series of slots. The online and mobile casino game is called Euphoria, and while not delivering quite the same high volatility as the other titles, it still has an above average hit rate.

In terms of specific core information, Euphoria has 5 reels, 3 rows, and is based around 243 Ways to Win system. It is a sharp contrast to the other 2 Xtreme Pays Series titles, Egyptian King and Wild Ape, at least as far as visuals are concerned. The highly detailed and striking art styles of the previous games has been done away with, settling instead on abstract images, and a calming, psychedelic soundtrack. These changes may take fans of the series a bit by surprise, but Euphoria is still an exceptional slot with plenty to offer.

The theme of the slot appears to be gemstones, although the images are presented in the most abstract of ways, giving the title a distinctly spacey atmosphere. The highest paying symbol is a diamond, which grants an exceptional 13x win if matched with itself 5 times. The low symbols are the expected playing card icons, including J, Q, K and A.

Interestingly, an unusual deviation from the expected norm is that the diamond need only match with itself 2 times in order for a payout to be won. All other symbols in Euphoria must match a minimum of 3 times.

There is also a Wild, presented as a multi-coloured star, and a Bonus symbol. These 2 are the keys to the biggest possible payouts in the game, with a massive 243x multiplier possible.

The Star Is Key

If at least 3 Bonus symbols land on the reels, things start to get interesting. 8 initial Free Spins are awarded, which will play out automatically. However, the Wild comes into play in a big way during a Free Spins sequence, acting as both a Wild, and a multiplier. A single Wild grants a 2x multiplier, another turns the multiplier up to 3x, while 5 Wilds adds an additional 5 free spins to the standing total.

Head of games at iSoftBet, Mark Claxton, shared a few comments on the release of Euphoria. He referred to the title as a breath-taking experience, and assured players that a number of other high volatility games were already in the works. Assumedly, these will also be added to the Xtreme Pays Series.