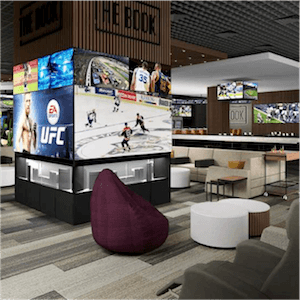 Caesars Entertainment is trying a new tactic in their never-ending bid to corner a market that, for the most part, has eluded live casinos: the millennial gambler. Their strategy is the Fan Cave, which provide many of the same kinds of freedoms and social opportunities as the man caves strewn across private homes the world over do. It’s just that Fan Caves are set up at the Las Vegas LINQ Hotel instead.

Punters Own the Space

Chris Stuart, VP of Gaming and Interactive Entertainment at the LINQ, described the space as non-traditional, saying that bettors owned it, making it far more social. Stuart said that Fan Caves allow for groups of friends to engage with one another, pouring their own beer and ordering their own food as they enjoy the action on not 1 but 3 TV screens.

One 98” set and 2 more around half of that size offer punters a way to not only watch the game, but to play other video games if they want to as well. Customers are also given full control over all 3 screens via a remote controlled tablet, a feature lacking from traditional bookmakers.

There are currently 12 Fan Caves at the Linq that can be rented out privately, but this is just the beginning.

It’s no secret that Caesars wants to find a way to tap in to the Millennial market, and no wonder, either, with this generation outstripping baby boomers by as much as 8 million, according to the US Census Bureau. Studies have revealed that the priority for Generation Y, as they are also known, or those born between the years 1980 and 2000, prioritise socialising when they do gamble, and prefer games of skill. So The LINQ is converting 44 000 square feet into a kind of laboratory in which they can experiment with what will bring this demographic through casino doors.

It’s not the first time a casino company has tried to lure Generation Y, with others doing so by offering slots more based on skill than luck, for example. Perhaps booking more contemporary musical acts would help? Others feel that the growing popularity of sports betting in the United States will do the trick, since this type of gambling is more dependent on skill than spinning the reels of a slot machine is.