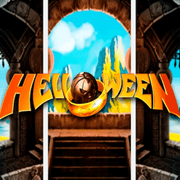 The spookiest, scariest, and eeriest time of the year is now on a super-fast approach – and right on time to celebrate is Play’n GO’s latest new slot release, Helloween.

Based on the German power metal band that goes by the same name, Helloween pays tribute to a unique and legendary era of rock-meets-metal while presenting online slots enthusiasts with countless opportunities to win real money payouts.

The object here is very obviously winning first and the enjoyment of theme second. This doesn’t at all imply a half-baked tribute to the band the slot has been named after, though. Even though the members of the band aren’t featured among the game’s symbols, Play’n GO’s latest big release does feature several Helloween tracks rifting and scaling away in the background as part of the game’s super thrilling soundtrack. Popular Helloween tracks featured include tracks featured on Keeper of the Seven Keys Part I and Part II.

Symbols that do appear on the slot’s reels create a truly spectacular spooky Halloween show – including magical rings and sorcerers. Scatters make a star appearance too and are depicted by the image of an Orb. Lower-paying symbols appear in the form of playing cards. The spooky magic-show comes together against a creepy background featuring a mysterious room in a castle tower.

The slot presents the player with several special bonus features for the ultimate Helloween treat. The supreme highlight of the Helloween show is definitely the Keeper of the Seven Keys Feature Wheel. Triggered by landing Orb Scatters on the reels, the feature can potentially land on any one of six crazy-win bonus games. Examples are features awarding 5 free spins to the player and the Helloween Free Games Feature, which activates a cool 7 free spins.

Another top feature and one well worth chasing down is the I’m Alive bonus round. Once triggered, the feature is boosted by Wild symbols expanding up or down to fill entire reels before landing in place and remaining in position. Expanding Wilds also make a star appearance in the Eagle Fly Free Spins bonus feature.

Other special bonuses include the Dr. Stein Free Games bonus round, featuring playing card symbols transforming into extra Wilds, and the March of Time bonus feature, which sees all Wilds landed remaining active on the grid for the entire duration of the feature – whilst moving only a single reel to the left with each consecutive spin.

This new online and mobile-optimised slot celebrates Halloween in just the right way, and is an ideal tribute to the band it’s named after too.