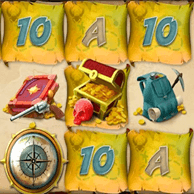 Kalamba Games have finally revealed their latest in-development slot, and it looks to be something special. Called Sadie Swift: Guns’n Glyphs, the game is nothing short of an epic adventure, pleasantly wrapped in a reel spinning design. The concept is simple; players join the titular explorer Sadie, who is on a globetrotting quest in search of buried treasure.

The title will have players investigating mysterious maps, traveling from location to location, and, of course, potentially earning some massive payouts in the process. From the wonderfully cartoony graphics, to the layers of detail and polish, Sadie Swift: Guns’n Glyphs stands apart as a slot with true heart.

The character of Sadie will almost certainly draw comparisons with Lara Croft, depicted as a smart, cowboy hat wearing blonde lady that would certainly be at home in a fashion catalogue. But slots players best not sell her short, as this blonde explorer is also packing a six shooter. Accompanying Sadie on the reels is a compass, treasure chest, Sadie’s cowboy hat, and a six-shooter laid atop a mysterious book.

Most interesting is that Sadie Swift: Guns’n Glyphs takes place across more than one ‘location.’ The player starts in a dusty, mysterious house, with sunlight streaming in through filthy windows. But, upon various special features being triggered, the potential exists to travel to Egypt, or even to the Old West.

In terms of basics, the slot features 5 reels, 20 paylines, high volatility, and an RTP of 96.24%. The biggest payouts are possible during the Bonus games, which are triggered by matching at least 3 Scatters. Or, alternatively, is also possible to purchase a Bonus round via the HyperBonus option.

Once a Bonus has been triggered, or purchased, a screen will then appear allowing a special feature to be selected. In Egypt, 8 Free Spins are awarded, but with special Expanding Symbols added to the reels. In the Wild West 8 Free Spins are also awarded, but with Sticky Wilds added to the reels. Regardless of the choice, there is always massive payout potential, almost guaranteeing the player will walk away smiling.

Sadie Swift: Guns’n Glyphs is an excellent slot, and it looks to be a crowning achievement for Kalamba Games. It is due out on the 19th November 2020 on desktop and mobile, and no doubt fans of fun, adventure and big payouts are already putting on their explorer hats.