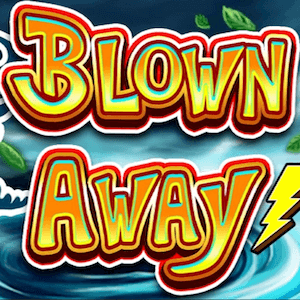 Development studio Lightning Box Games have unveiled their latest slot titled Blown Away, and it is already looking to be a hit. As the name suggests, the new online slot is based around a tornado sweeping across a landscape, causing the locals all sorts of trouble. But there is no need for concern, as the anthropomorphic cast of characters, including a walrus captain, are taking it in their stride.

Blown Away is a comedy slot, notable for outstanding animation and impressive artwork. Almost every spin of the reels comes with another surprise, including animated cows being sucked into the tornado, the walrus captain expressing his defiance, and much more. Lightning Box Games have outdone themselves, creating one of the most delightfully engaging casino games in years.

The Tornado Is A Friend

Against all expectations, the tornado in Blown Away is an ally to the player. Many of the special features are based around the swirling cone of wind improving winning chances, though the walrus captain still doesn’t seem very amused. During the base game, if the tornado lands on the centre reel, it offers a helping hand. The gushing wind removes the lowest symbol from the reels, and triggers an instant respin.

If 3 Boat symbols land on the reels, the Bonus symbol in this game, the Free Spins feature is triggered. But before the spins play out, the tornado appears, sweeping across the 5x3 reels and removing the lower paying symbols. This leaves only the highest paying symbols for the free spins, potentially increasing payout amounts. Who would have guessed a tornado could be your friend?

Cow To The Rescue!

If Blown Away wasn’t quirky enough already, Lightning Box Games has gone one step further, making the cow a central part of gameplay. The cow is in fact a multiplier. Each time the re-spin feature is triggered, there is a chance it will suck up a cow. In outrageously animated fashion, the cow is sucked kicking and struggling across the reels. The animal will then be added to a meter on the left of the reels, adding a multiplier to payouts. This multiplier can be stacked if more cows are sucked up, potentially making payouts substantially more lucrative.

Blown Away was initially released exclusively at Sky Vegas casino between March 31st and April 15th, but has now been released to the greater iGaming market. Players keen on sucking up a few cows of their own can enjoy playing this new online slot on desktop and mobile at casinos powered by Lightning Box Games.