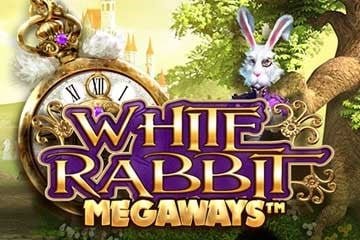 Major slots developer Big Time Gaming is well known in iGaming circles for its thrilling and immersive mobile video slots. Now, the developer has launched yet another blockbuster slot game, this time drawing inspiration from the tale of Alice in Wonderland to create the White Rabbit online slot.

The new slot game has now been made exclusively available at LeoVegas mobile casino, and offers something a little different from the norm for players this month. The slot is an adult-themed title that incorporates all of the much-loved characters from the original story, including the White Rabbit himself. The game also makes use of BTG’s cutting-edge Megaways game mechanics for a truly exciting slots experience.

The brand new slot game offers two new USPs as well: Extending Reels and Feature Drop. Feature Drop took the developer 18 months to create, and allows players to purchase the bonus feature as they enter the game. Furthermore, they will be able to enjoy the game to drop the feature’s price by earning BTG coins on the reels – or, of course, they could wait for the feature to trigger on its own.

The Extending Reels also offer a thrill of their own, and will begin during the Down the Rabbit Hole free spins feature. The feature offers up to 60 retriggered free spins once the reels have become full extended, with all reels opening up to as many as 12 symbols, creating a monstrous 248,832 ‘Megaways’ to win!

Big Time Gaming created its White Rabbit slot specifically for streamers – players who enjoy broadcasting their play to viewers on platforms like Youtube and Twitch. These players will now be able to do so easily with the Feature Drop, in which the audience can request the feature at any time.

Slot To Be Launched At BTG Partners On 8 November

The game launched at LeoVegas casino on October 25 at 7pm, and Swedish slots playing star Kim Hultman (better known as ‘LetsGiveItASpin’ on Twitch) was the first to give its reels a spin while broadcasting the footage live to his huge community of casino fans and followers.

Now, after its exclusive launch at LeoVegas, the slot will soon become available to the broader slots market on 8 November. CEO of Big Time Gaming Nik Robinson noted that White Rabbit is his company’s ‘most sophisticated game to date’, offering the innovative Megaways mechanic paired with action for both low and high-rolling players.

Visually, Robinson said, the slot is stunning, with plenty of detailed graphics and intricate animations for players to enjoy. Combined with its mechanics, he said, the slot offers an immersive gaming experience for all, and his company is delighted to offer it at all BTG partner casinos from 8 November.