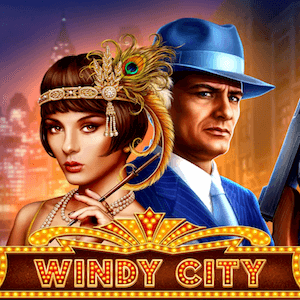 iGaming developers Endorphina jumped into a time machine for inspiration, travelling back to the 1930s, Chicago. This was an era rife with crime, corruption, and Tommy-Gun wielding mafia. Thus, the new slot Windy City was born, an interesting title that takes all its cues from old school mafia films. Expect to see liquor bootlegging galore, gloomy streets illuminated by florescent lights, and more fedoras than you can shake a stick at.

Windy City operates on a 5x3 reel system, has 10 fixed paylines, and features Free Spins and an interesting Risk Gamble Game. It all comes together to create one of the most intriguing slots in years, proving that Endorphina are serious about continuing their already impressive line of successful titles through to the end of the year.

What would a mafia themed casino game be without beautiful broads, stylish old cars, and bootlegged crates of booze? It’s all here in Windy City and looking stunning in some of the most impressive HD artwork ever seen in an online slot. The background of the reels sets the mood, showcasing a glorious 1930s city street bathed in yellow light.

This attention to detail extends to the game’s symbols, with the Broad, Gangster and Whiskey being the highest paying symbols. Match them and see the animations trigger, bringing each character to life. The low symbols are the more traditional 10, J, Q, K and A.

But players should be sure to keep their eye on the cigar smoking Mob Boss, he acts as the Wild and is the ticket to some big wins.

To strike it lucky, the classic 1930s car will need to appear 3 or more times on the reels simultaneously, and this will grant 10 Free Spins. The free spins can also be retriggered during the bonus round, offering even more winning potential. Needless to say, Free Spins are the ticket to the biggest base game wins possible in this slot.

The most interesting feature in Windy City is the Risk Gamble Game. After a win, the option is given to risk it all in a mini game. The player must select from a series of cards, and if they pick the high card, they’ll instantly double their payout. The option exists to play this game a total of 10 times, with the payout doubling each time a successful gamble is taken.

Players that want to go head to head with the mob can try their luck in this new casino game on desktop and mobile at sites powered by Endorphina software.