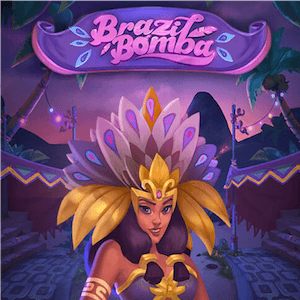 In little more than seven years, Yggdrasil has become an award-winning name among online slots developers, garnering plenty of dedicated supporters in a number of regulated markets. The company holds three licenses in Great Britain, two in Romania, and one each in Malta and Gibraltar, so it has developed an extensive footprint since its launch in 2013.

Innovation and timing have both had a bearing on the Yggdrasil success story, and the developer demonstrated both with the release of new slot Brazil Bomba earlier this month. It arrives just as the excitement of the annual Rio Carnival is about to peak, and the design and music of Brazil Bomba stays true to the colourful fireworks and hypnotic rhythms of Carnival itself.

Brazil Bomba, featuring a drummer/dancer against a Rio backdrop in rainbow hues, has six reels displaying eight symbols each, but they move more like tumbling blocks. The low-value symbols are fireworks in various colours, while high-value symbols are the drums and maracas of the Carnival parades. There’s not much difference between the design of several instruments; it’s the colour of the symbol that determines its value.

But what makes this slot’s gameplay innovative is the absence of traditional paylines; players score a win any time six or more identical symbols touch – horizontally, vertically or diagonally. The more symbols match in one cluster, the higher the payout.

It’s when a winning cluster forms, that the explosive part starts. All winning symbols explode, and more drop down – in effect, a free spin, that gives players a chance at another win. Which will trigger another explosion, and more symbols dropping, so multiple wins on one spin are possible.

The Bomb symbol in Brazil Bomba triggers a starburst explosion, radiating out from that block. Depending on where the bomb ends on the reels, the explosion can remove up to 16 symbols, triggering another drop-down and more potential wins.

Every time the player wins, or a bomb is triggered, a multiplier starts counting to the side of the reels. Each successive win or bomb will increase the multiplier by X1, enhancing the player’s wins, but the multiplier resets after a loss. On a 50.00 max bet, a full house – 48 identical symbols – has a top prize of 50,000.

There is also a Free Spins symbol. If 3, 4, 5 or 6 Free Spins icons appear on the grid of 48, players receive 5, 10, 15 or 20 free spins. During free spins, the normal rules apply – except that the multiplier doesn’t reset after a loss – so the biggest wins are possible in this round.

This scintillating new slot is available for play now, and can be enjoyed on desktop and mobile at Yggdrasil powered casinos.