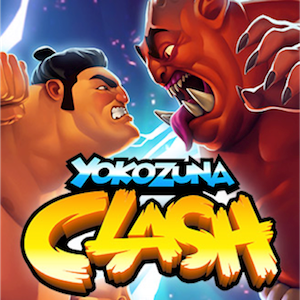 Award-winning Scandinavian video slot developer Yggdrasil Gaming has stepped into the sumo-wrestling ring for its latest release, Yokozuna Clash. The 5-reel, 3-row slots game recreates the atmosphere of a live sumo wrestling match, while presenting players with the opportunity to win up to 86 000 coins.

Players can enjoy Yokozuna Clash regardless of their platform or operating system, as the game is compatible with Android, MacOS, Windows, and iOS.

The slot features quirky cartoon graphics, with a fun soundtrack to match, as well as an array of symbols inspired by Japanese culture. These include red phoenixes, purple tigers, green turtles, and blue dragons, in addition to the wild and scatter symbols.

The reels of the Yokozuna Clash spin above a traditional Japanese dohyō, the ring it which sumo wrestling takes place. Two wrestlers are brightly lit in the foreground, while the crowd of spectators filling the massive arena is dimly visible in the shadows beyond. During free spins, the wrestlers go to battle to reach the sport’s highest rank – that of Yokozuna.

Riku and Hazu, the sumo wrestlers beneath the reels in the slot do more than simply enhance the game’s theme. Each of them has special features that can be activated at any time. Riku, the wrestler in blue, adds one or two wild symbols to Reels 2, 3 or 4. Hazu, the wrestler in green, awards a 2x or 3x multiplier to the winnings of the spin on which he comes to life.

In the Yokozuna Clash base game, instead of fixed paylines, players have 243 Ways To Win by landing matching symbols lined up across adjacent reels.

The Free Spins Tournament is activated by the simultaneous appearance of scatter symbols on the first and fifth reels. At this point, a sumo wrestling tournament commences. During the free spins tournament, players must match symbols to defeat their opponent and continue to play.

The objective is to match symbols from left to right, as doing so in the opposite direction will cause the fighter gradually to lose ground and eventually be defeated. Wilds and multipliers add to the payout potential of the free spins bonus, which ends with the Final Fight stage, where the player must square off against the head Yokozuna.

Another potentially lucrative part of the game is the Sumo Clash feature, in which between two and four additional symbols are activated by a five-reel win, taking players a little closer to that potential 86 000 coin top payout.

Yggdrasil’s Yokozuna Clash video slot features an average return to player of 96.3% so if you dare to enter the Dohyō, it’s sure to be richly rewarding.