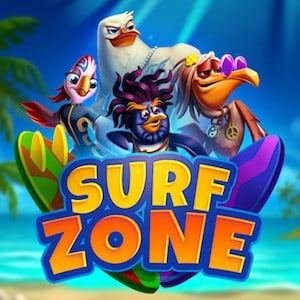 It wouldn’t normally be considered that surfing and wacky bird characters would work together as far as online slots themes go. But Evoplay are here to prove those naysayers wrong. The developer’s new mobile focused slot, Surf Zone, is based around that exact combination. Surprisingly, the unusual mashup works very well, offering slot players a humorous visual experience, even as they shoot for the big wins.

The charming birds in Surf Zone seem to have taken a liking to shredding some waves, though it isn’t as nonsensical as it sounds. Each bird is a clear parody of a surfing stereotype, from the buff bird who is all about image, to the tattooed bird who is just happy to be out on the waves.

Each of the characters, Clint, Anaru, Jess, and Liam, are brilliantly brought to life with expertly crafted cartoon artwork, and it all comes together to make the online slot one of the more visually appealing in recent months.

As its foundation, Surf Zone has 5 reels, 4 rows, and 25 fixed paylines. The RTP is an impressive 96%, while the game volatility is rated as low/medium. The big draw card of this online slot is the built-in betting feature, which allows players to put down money on which of the 4 characters they think will take home the surfing trophy. It is a novel idea, and certainly a clever way for Evoplay to work in a contained betting function.

Some of the other features include Free Spins, Double Wild Symbols, and two different kinds of multipliers; Surfer Multipliers, and Personal Multipliers.

It is all about the Free Spins feature in Surf Zone, during which all the special features come together to imitate a surfing competition. When 10 Free Spins have been won, the 4 surfers go head to head. Or, more accurately, each of the 4 symbols has a separate Personal Multiplier attached, which represents the character’s progress in a competition. As the Free Spins playout, if a surfer is part of a win that involves a Double Wild, that surfer’s multiplier is increased by x1.

However, before the Free Spins, the player is given the option to place a bet on which of the 4 characters they think will have the highest Personal Multiplier, by the end of the last spin. So Free Spin are given an extra dose of excitement, allowing the player to pick a favourite, and brace as the action plays out.

Surf Zone is a charming, creative online slot, and perhaps one of the best from Evoplay. It is out now, and available on mobile devices and desktop too.