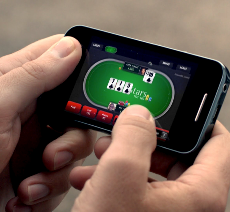 Gaming operator PokerStars is poised to enter the world of social mobile gaming in a whole new way. This follows the announcement of the rollout of its newly-launched, revamped PokerStars Play app for Android and iOS.

According to the operator, the initial phase of the rollout will target Australia and the USA. Players in other regions of the world will be able to download the app as the rollout continues over the next 12 months.

The operator’s director of social gaming, Lloyd Melnick, said that the app brought PokerStars closer to its goal of being a social casino leader. He added that the app took the best of playing Poker for real money, and combined it with features typical of social mobile gaming.

A Closer Look at PokerStars Play

The PokerStars Play app will offer players a range of free Poker games. Hold’em and Omaha ring games will be among the variants available, and will feature gesture-based controls that simulate lifelike play.

The app will also feature daily promotions, trophy rewards, and weekly tournaments. Free-play Slots will also be included in the app, as will Spin & Go tournaments.

Players will be able to share their Poker and Slots victories using innovative social media features, and they will be able to increase their virtual bankrolls through in-app purchases.

Lee Jones, head of communication at PokerStars, said the app’s offerings and mobile devices were a perfect match. He added that the app would allow players to enjoy the fun and spontaneous nature of the game, regardless of where they found themselves.

App to Tap Into New Markets

The announcement that Australia will be one of the first two regions in which PokerStars Play will be rolled out may surprise Aussie players. PokerStars announced recently that it will withdraw its real-money gaming services in their entirety by the end of September.

The move is to comply with the country’s Interactive Gambling Amendment Bill 2016, which was voted in by the Senate earlier this month. It is only a matter of time before the bill, which prohibits offshore companies from offering real money gambling services in Australia, is signed into law.

US law, as well as the law of some countries in Asia, also does not allow offshore companies to offer real money gambling services

However, because the app does not offer real money Poker, the PokerStars brand is set to retain its presence in Australia, and to extend its reach into other markets in which its real money services are barred.

David Baazov, CEO of PokerStars’ parent company Amaya, said that he anticipated that social gaming would be a key channel of growth for the company.