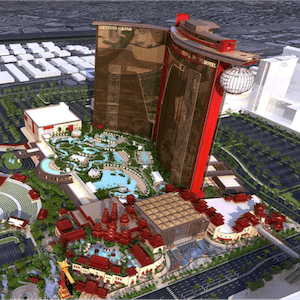 At first, it seemed like a typical pipe dream. One of high hopes never quite coming to full fruition. It was in 2013, exactly 5 years ago, that the Genting Group purchased a portion of land on the Las Vegas Strip. The land was purchased from previous owners Boyd Gaming, and measured a very impressive 87 acres. It was a story of promised potential, and the piece of land was earmarked specifically for development of what was to be the future home of the group’s Resorts World Las Vegas.

However, it soon transpired that the development would not be upgraded or completed as soon as first expected. Onlookers started to become very negative regarding the development of what was considered a prime property on the Strip, having been the former location of the well-known Stardust Casino. A lot of uncertainly prevailed, and no one knew for sure what the reasons behind the long delay were.

Then, 2017 rolled around, and the Genting Group announced that everything was finally in place in order to bring the dream development to its full potential. At the time, the group advised that there were still some trade issues between the United States and China that needed to be resolved, but that the situation looked promising. The expectation was that the resort would be completed by no later than 2020.

With two years remaining until the proposed date for completion, everything seems to be well on track. The Genting Group is adamant that nothing will stand in the way of the dream development being completed. No further delays are expected, and the group remains positive that the 2020 deadline will indeed be met in good time.

According to the Head of the North America Equity / High Yield Research division for Union Gaming, John Decree, there is much more to the perceived delays that what meets the eye. Decree is of the opinion that the group may be in the process of property assessing the current economic climate, and specifically the one prevailing in the United States, before making a final decision as to the scope and size and final nature of the resort.

The Las Vegas Strip is notorious for being a highly competitive region and is home to some of the best and largest casinos in the world. Being on par with current standards is vital if any newcomer is going to succeed in this region.

According to various inside sources, the resort will eventually be home to several top-class restaurants, a hotel offering first-class accommodation and, of course, a superb gaming space measuring in excess of 100,000 square feet.