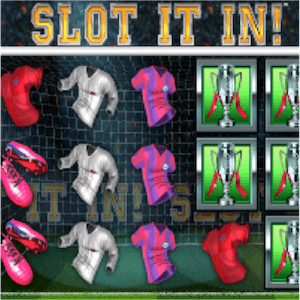 Online gaming software experts Realistic Games have just revealed a brand new online slot. Released just in time to capitalize on the action of the World Cup 2018, the brand new Slot It In! game boasts mobile-optimized fun and a wealth of sensational soccer bonus features.

The new title plays out over 5 reels and 10 paylines, with all winning combinations counted from left to right across the reels. It is on these reels that players will find a wide variety of colourful symbols, including soccer jerseys, boots, whistles and footballs. All of the symbols relate directly to the theme, providing even more sports-related action for real money punters.

The launching of a soccer-themed slot at this point in time has come as an extremely smart move from Realistic Games. The brand new title allows players from all over the world to take part in the thrills of the World Cup, even if they cannot watch the matches in person, by putting them in the midst of a packed virtual stadium to bring the atmosphere of the event right to their screens.

Bringing the Action to Life

Just like at the real World Cup, the crowds in Slot It In! will cheer in delight as players land big winning combinations and score lucrative goals in the title’s bonus rounds. Naturally, the golden trophy is the highest paying symbol present on the reels, and landing 5 trophies on a single payline will award players a whopping 25x their base game stake.

Landing 3 or more of any matching symbol on a single reel will also trigger a unique bonus feature. This is a free respins round in which players will be able to pick any reel they like and will have it locked in place while the others spin again. Simply land more matching symbols on the other reels for a great shot at a huge soccer victory!

Slot It In! is Now Live

There is plenty to enjoy in Slot It In!, from its simple but entertaining format to its RTP of over 95%. It also has a tried and true theme that is extremely relevant given that the WC 2018 is currently in play, which will no doubt bring the developer and its latest release great success. The slot is now available at all Realistic online and mobile casino sites.

Commenting on the new release, Realistic Games’ Commercial Director Robert Lee noted that the world is becoming crazy over soccer this summer, which makes it essential for operators to capitalize on this big opportunity.

Lee added that by fusing one of the biggest events in the annual sporting calendar with fantastic graphics, a fun soccer theme, and an exciting bonus round, Realistic Games is confident that Slot It In! will win the hearts of all of its international players.