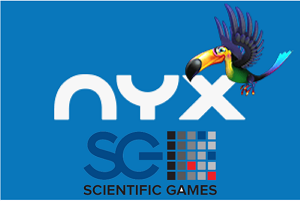 Scientific Games is set to bring NYX Gaming Group into the stable; a move that is the latest in a list of recent acquisitions. The Las Vegas-based game developer announced it reached an agreement to buy the Canada-based company for approximately US$632 million.

According to Scientific Games, the acquisition of Canada-based NYX will expand its digital gaming offerings. Its online betting products will be expanded by the NYX OpenBet sportsbook, and its online lottery products are also set to grow.

This positions the developer well for the expanding online gambling industry. A Technavio market research report indicated that global online gambling should see a compound annual growth rate (CAGR) of more than nine percent between 2016 and 2020, while sports betting’s CAGR is expected to increase to more than four percent in the same time frame.

This bodes well for the developer, whose shares gained more than 280 percent in the past year. Scientific Games said it was confident that the acquisition of the Toronto Stock Exchange-listed company will increase its earnings in the first year following the deal’s completion, which is expected to happen by the end of 2018’s first quarter.

According to reports, current NYX CEO Matt Davey will head up the new digital gaming and sports division at Scientific Games once the deal has been completed. Current Scientific Games’ business-to-business interactive managing director Leigh Nissim reportedly will join Davey in the new division.

Acquiring game developers appears to be a key part of Scientific Games’ strategy to increase its international gaming and computerised system offerings. The developer began its campaign of acquisition and expansion in 2010, when it bought GameLogic as well as Sceptre Leisure Solutions.

A year later, it acquired Barcrest Group Limited, and in 2012, it acquired Parspro and Provoloto. That was followed by the purchases of WMS Industries and Bally Technologies in 2013 and 2014 respectively. In January this year, the developer completed its DEQ Systems acquisition, and in July, it completed its Red7Mobile acquisition.

The developer’s five percent senior secured notes will be available until 17 October. The notes will be safeguarded by liens on the collateral, and are due in 2025. A further seven percent is due in 2022. The notes are registered under the 1933 Securities Act.

If the developer is unable to complete the NYX acquisition, the senior secured notes’ proceeds will be used for general business purposes such as prepaying term loans.