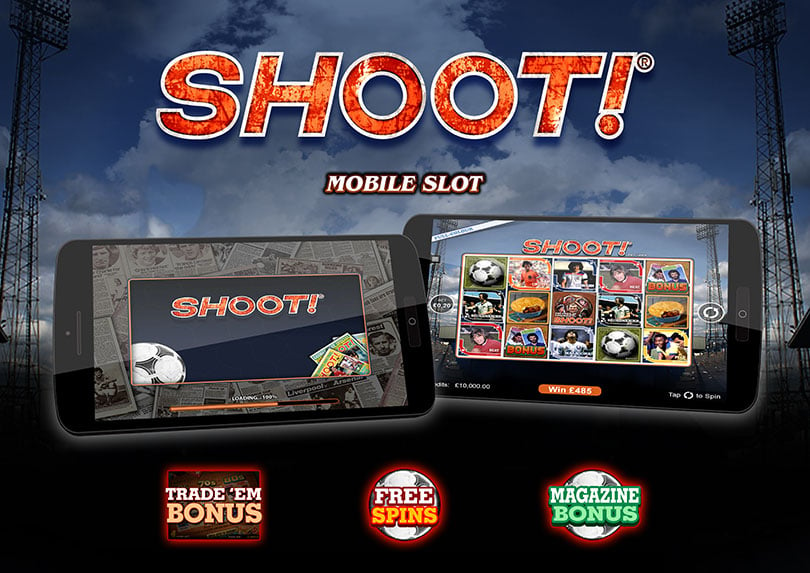 Microgaming is renowned for creating top quality slots games that appeal to a wide fan base. Their recently released Shoot! coincides perfectly with the current soccer mania that’s sweeping the globe, as the UEFA Euro 2016 kicks off.

The game draws its inspiration from Shoot!, a popular British soccer magazine that was launched in 1969 and is still going today, albeit in an online format and with special publications, rather than weekly releases. This Microgaming slot takes players back in time to the golden age of soccer, when goals were spectacular, big hair was in fashion and big personalities were in abundance.

Shoot! boasts a retro design and is a true celebration of the sporting legends that made the 1970’s and 1980’s such memorable eras. The 5 reel, 50 payline video slot is peppered with photo realistic images of players such as Maradona, Beckenbauer, Cruyff, Pele, George Best and Kevin Keegan, along with other related reel symbols such as an old school soccer ball, soccer rattles and a meat pie.

A major attraction of Shoot! is its multi-level bonus feature. Microgaming has a reputation for creating innovative bonus features and Shoot! has benefited from their considerable skills. When 3 or more of the bonus symbols, which are also the game’s Scatters appear anywhere on the reels, the bonus feature is triggered. This feature consists of a primary and 2 secondary levels through which players progress by finding tokens inside the main bonus round.

The Trade ‘em bonus round is a celebration of the classic Panini stickers and players will be faced with a choice of 12 pictures of soccer stars. 4 images must be selected and they’ll reveal random cash prizes, or the key to activating 1 of the 2 secondary bonus games. In the first of the 2 secondary bonuses, players are shown 12 Shoot! magazine covers from which they must pick to reveal prizes, until they uncover a red card and are returned to the Trade ‘em bonus game. If the free spins icon appears in the Trade ‘em bonus, between 10 and 35 free spins are awarded with all prizes doubled.

Shoot! Also appears as a Wild symbol in the form of the games logo. This special symbol can substitute for all other symbols barring the bonus or Scatter to compete a winning combination on one of the games 50 active paylines.

Available at Microgaming powered casinos, Shoot! can be enjoyed on desktop or mobile and played for free, or real money. Players who opt to wager real money stand a shot of winning the 619,000 coin jackpot, so this game will more than likely appeal not only to soccer aficionados, but those who enjoy top quality slots with larger jackpot payouts.