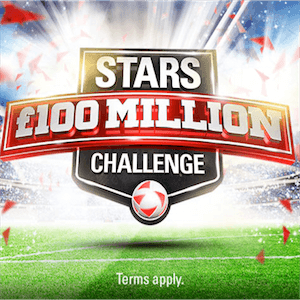 It’s almost time for the 2018 FIFA World Cup and Canadian iGaming giant The Stars Group have decided to celebrate it in true winning style. Stars Group has launched a special promotion in celebration of Russia 2018, and players stand in line to win their share of a very impressive £100m. This is without a doubt the biggest competition of its size and something to look forward to this summer.

The Stars £100 Million Challenge is the company’s very first competition to run vertically across all of its platforms, including PokerStars, BetStars and PokerStars Casino Brands. It’s a multi-market promotion the size of which isn’t often seen in the casino industry.

What to do to get one’s hands on this amazing prize pot? Correctly predict the outcome of all 64 national games to be played in the 2018 FIFA World Cup. Should a customer be lucky enough to predict the correct outcome for all 64 games in a win-lose-draw format, he or she could win up to £100m.

What’s more, even if the full monty isn’t achieved, the player that correctly predicts the score for the highest number of national matches, will walk away with £10,000 in cash as well as a Platinum Pass to the PokerStars Players No-Limit Hold’em Championship in the Bahamas come January 2019.

To add further excitement to the guessing gala, PokerStars has enlisted the services of former cricket star, now television presenter, Freddie Flintoff, as official competition brand ambassador. Danish comedian Casper Christensen and Swedish celeb-chef Per Morberg will head up the representative action in the Nordic regions.

Chief Executive of the Stars Group, Rafi Ashkenazi, said the competition was all about bringing the biggest prize money in the history of sports betting, to the group’s loyal customers, and thereby becoming the first choice for an entertainment destination in the iGaming industry.