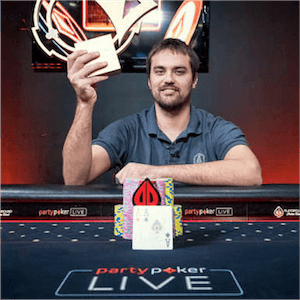 After days of action-packed poker play, the partypoker LIVE MILLIONS North America tournament has drawn to a close. Hosted in Montreal, Canada this year, it was Californian player Taylor Black who eventually took home a first-place win as the last event of the tournament came to an end.

The US national poker professional claimed his very first LIVE MILLIONS winning title this year, earning himself an enviable CA$1,400,000 for his efforts. Black was able to secure his big win after beating competitor Darryll Fish in heads up poker play, leaving Fish in a respectable second place finish.

The partypoker North America Main Event had a high-stakes buy in of CA$5,300, and a total of 1,954 poker players competed in the tournament throughout its duration. According to the event’s host, just 251 of these players bagged themselves a cash prize for their participation, and only 9 players returned for the final event to compete for the tempting title of overall winner.

Over many hours, the Main Event field reduced to just 2 final players, with Fish and Black competing head to head for the win. Black started out with a significant chip lead over his counterpart, holding 1,590,000,000 over his opponent’s 350,000,000. It took just over two hours for the poker game to come to a close, with Black winning outright and taking home his million-dollar prize pot.

On the final hand of the event, Fish wagered 45 million in chips, with Black responding by three-betting a massive 140 million. Fish called, and after showing a 9-6-4 flop, Black again took the lead in with 130 million. Fish went all-in at this point, with Black calling, Fish revealing Q-9 of Spades, and the leader holding an Ace pair.

The Winners and Their Prize Pots

After revealing a 6 on the first, Fish showed a Queen on the river to give himself a two pair. However, Black still held the game’s higher two pair, claiming the first place win and his very first LIVE MILLIONS North America win.

In sixth, seventh and eighth place finishes were Demosthenes Kiriopoulos, George Lagos and Tommy Nguyen, winning $400,000, $302,500, and $215,000 for their performances, respectively.